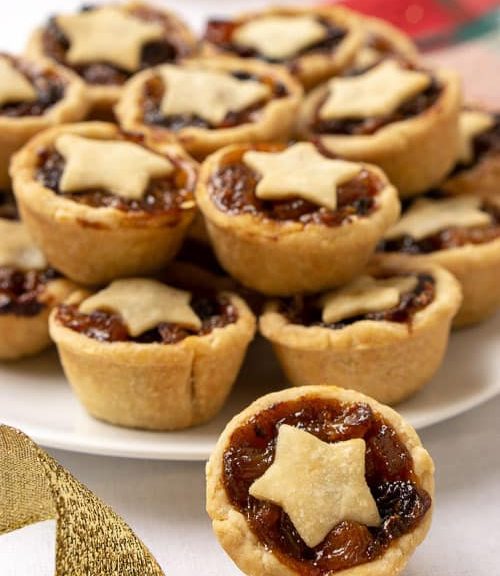 Mince Pies are a British Christmas staple. These sweet and boozy mini fruit pies are the perfect recipe to add to your Holiday cookie platter!

Mincemeat pies (or mince pies for short) are a classic British Christmas treat. What is it about these pies that makes them so special? Maybe it’s the sweet combination of fruit and spices. Or maybe it’s their long history in British cuisine.

Either way, they definitely deserve a place on your Christmas table!

Is There Any Meat In Mincemeat Pie?

Originally, mincemeat was made using meat with suet and a combination of spices and dried fruits. Over time, dried and fresh fruit has become more common and using meat has fallen out of favor.

It’s easy to make your own homemade mincemeat. And, then you know for sure what ingredients are in there!

Why Do They Call Them Mince Pies?

Mince pies have a long history in English cuisine, dating back to the 12th century and the Crusades.

Why Are Mince Pies Eaten At Christmas?

Meat pies are no stranger in British cuisine, but these meat tarts were a bit more extravagant because of their use of spices, expensive dried fruits, and a flat pastry top crust which allowed for intricate designs.

During the twelve days of Christmas (Christmas Eve until January 5th) it was common for the wealthy to put on large feasts full of expensive dishes, and mince pies often made an appearance.

The pies were originally made in an oval shape to represent the manger where the Christ Child lay. (Often the pies would even have a baby made out of crust decorating the top.)

And, the three spices used to season the filling: cinnamon, nutmeg, and cloves (or allspice) have come to be symbolic of the gifts the wise men gave to Baby Jesus.

How Do I Make Mince Pies?

Making mince pies can honestly be as simple or complicated as you want it to be.

On the simple end, you can purchase ready-made mincemeat and use pre-made pie crust for a super easy dessert.

Simply spoon the mince into the crust.

And, you have yourself a mince pie.

We like to make our own homemade mincemeat because then we have control over the quality of the ingredients, the spices, and how boozy (or not) we make it.

(And, if you’re wanting to make these pies for kids, making your own mincemeat is really helpful because you can substitute apple cider for the brandy, making them liquor free and kid-friendly.)

Mincemeat is really not that hard to make. But it is a good idea to make your homemade mince about a month before you want to use it, to really give the flavors a chance to come together as you store it in the refrigerator.

We also like to make our own pie crust. Homemade butter pie crust is so simple to make and easy to roll out. It doesn’t take much time at all.

In fact, most of the time in putting these mini mince pies together is taken in cutting all the small rounds of crust dough for each tin and then cutting all the decorative tops (if you so choose).

But, that makes these mini mince pies a fun treat to make with some kitchen helpers.

While mince pies are often small tarts, we’re calling this recipe “mini” because we make them in mini-muffin tins.

These mince pies truly are two bite treats, and are the perfect size to make them right at home on a Christmas cookie platter.

They are the perfect way to bring a little taste of a British Christmas to your celebrations!

If you’re a fan of mincemeat (or if you have some of your jar left after making mince pies), try your hand at these mincemeat muffins or thumbprint mincemeat cookies!

Mince Pies are a Christmas staple in the UK. These sweet and boozy mini fruit pies are the perfect recipe to add to your Holiday cookie platter! Yield: 24 mini pies

If you liked this recipe, here are some similar dishes you may enjoy!